My plan was to do my usual three 10 min walks and or sled drag action, but my parents decided to wreck their truck and flip it on its side on the way to Indiana. They were headed up to see my uncle for Thanksgiving and to pick up a 1963 convertible Galaxie 500 that my dad had bought.  They were only about an hour away from Columbia when the accident occurred.  They came into town for a nice lunch before making the nine hour trip up to Holton, IN.  After lunch they were on their way and I got the call about an hour later. We rushed up there to get them and by grace neither were hurt and only seemed to have a minor scratch here and there.  My Dad, who also has a thing for late 90s early 2000s Ranger trucks had spent a lot of time rebuilding the motor and fixing up this one - about 5 grand total in motor and tires and it is now complete wash.

When we got there the right-side top was crushed in where it flipped. Basically, my mom was staring at the dirt and looking up at my Dad hanging up on his seat belt.  Some bystanders helped break out the windshield and pulled him out and then pulled my mother out.  We did not get there until the truck had been towed away and the accident was cleared. 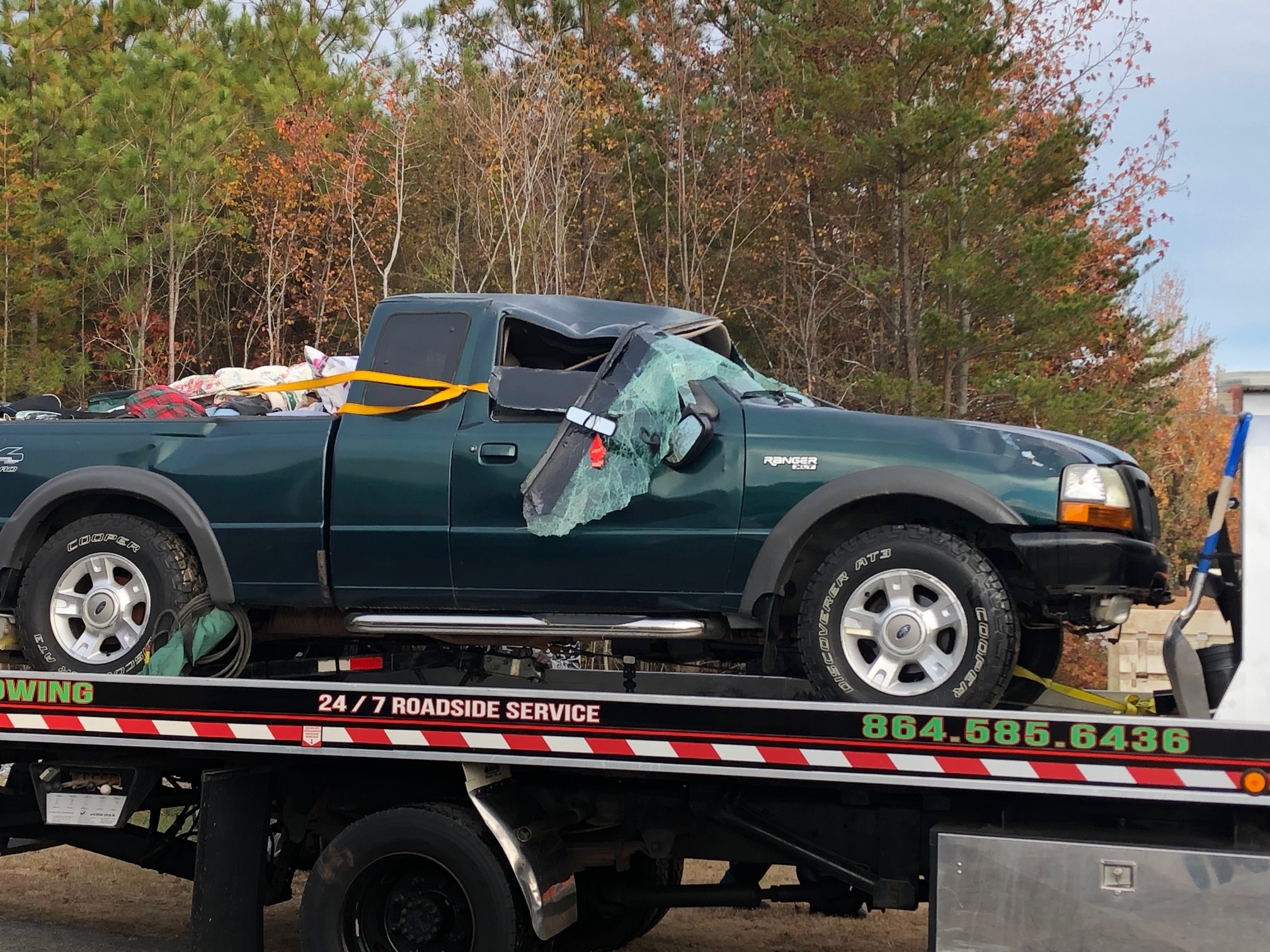 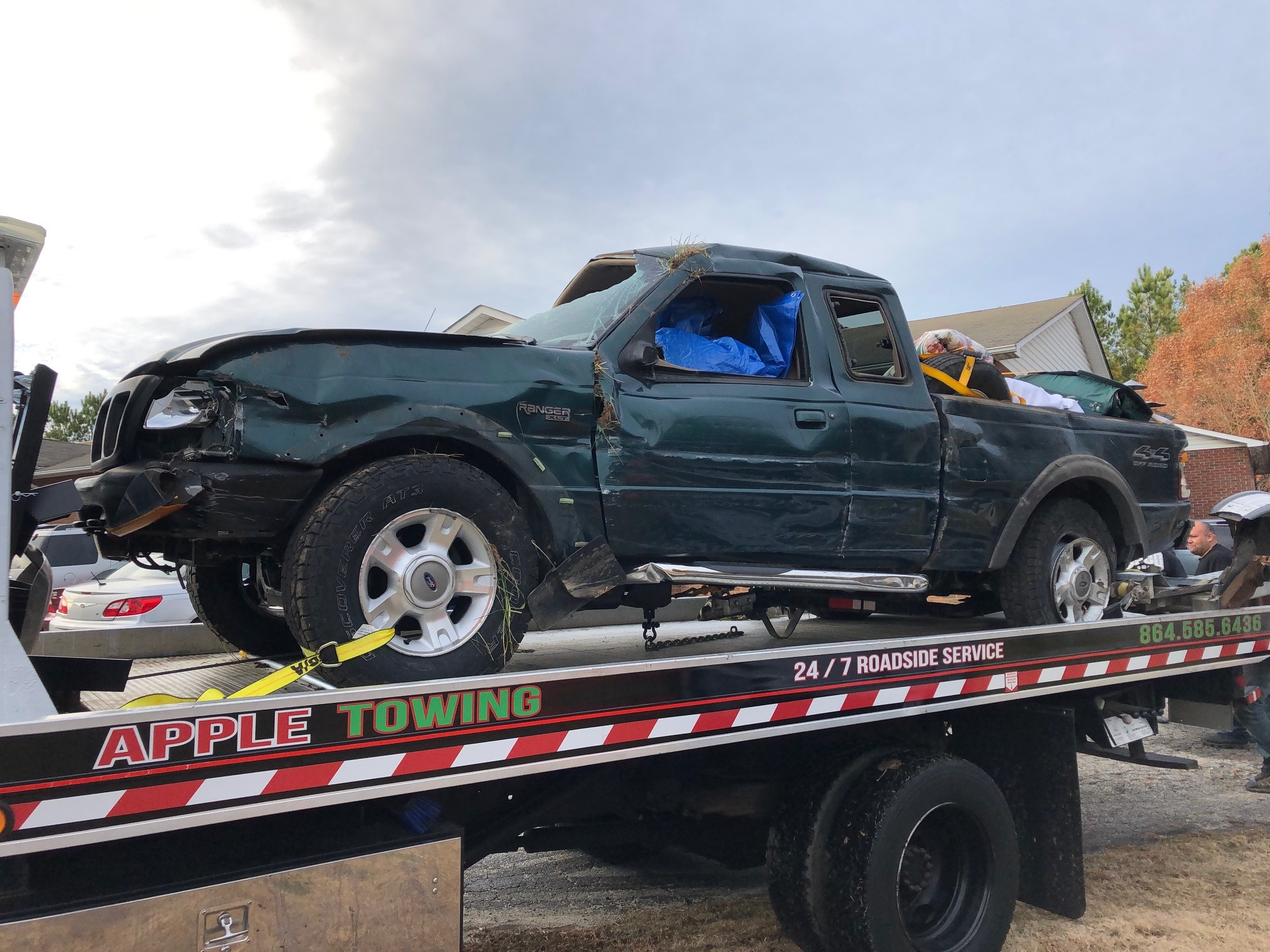 Both of my parents were there normal stoic selves. She just turned 79 and he 74 and they both acted like nothing had really happened. Once the truck was off loaded, we began to unload everything to my truck. Sounds easy enough, except my Dad is a hoarder and basically is prepared for any apocalyptic event that beyond calculations could occur. Luckily it was quitting time at the tow yard and they all wanted was to go home so one of the fellas helped us unload all the crap. My Dad likes to tell everyone what he has in the truck (what type of motor and other parts) so a couple of the guys came by and were salivating at the opportunity they could imagine.  Hoping he would leave it to be totaled by insurance for them to then squabble over it, I readily assured them that he would take it home no matter the cost.

The back of my truck was completely full and as all Dad's do, he asked if I had it under control and was I sure I didn't need his help strapping it down. It is always funny to me when parents don't trust their grown kids to do anything.  I know everyone else has the same issue with their parents.

Once we got everything tied down, after the strapping had met Dad's approval, we were on our way home. On the trip up to get them, of course there was construction causing miles of backup in the south bound lane. We were hoping to maybe skate by some of it on the way back, but that pipe dream was gone quickly as we passed up a couple of opportunities to get off and take an alternate route and rammed right into the traffic. We had just passed the last exit to get off. I guess our thinking was that the jam would not even occur as if magic intervened.  Yeah, no magic fairy tale for us, and it was actually longer it felt like when we gleefully rode by it on the way up.  As we hit the jam full on little did we know that it would last an hour and a half of eeking along. Once we cleared that, I was thinking ‘aight’, ramp that up to reckless driving speed!. That happened for about 20 minutes until Round 2 of construction on another section jammed us up.  It surprised me to run into the second jam and as I hit the breaks not trying to lock them up, I automatically braced my other arm across Pops.  Not really sure whether we would get rammed from behind, I darted eyes to the mirrors. The people behind us managed not to hit us but a few cars back, I saw a car slam and spin into the cables in the middle of the interstate. It looked like the cables caught the car in like a spider web and pulled it back in.  Whew I thought but also wished the best for the people in that car.   Also considering my night vision is dog shit now, it continued to be a harrowing and nerve-racking drive home.  It is another older moment I used to make fun of but now I see shadows and weird flying things.

In the way back meantime to the beginning of the traffic jam, the wonderful wife starts asking my Dad questions about his life from the beginning. Like most kids, he told me some of these stories many times, but being a boy on the go, I remember little. She says she just asks questions, but they always seem to be more than that and it always opens people up.  My Dad got on a roll from his life as a boy to what led him to join the Air Force at 18 to his two tours in Vietnam, two in Thailand and one in Korea.  A multitude of things, I had no idea about as our family ain't talkers, well except my Dad when you ask him things.  We got all the stories from working on farms for .25 cent an hour, learning how to work on bombs (all kinds) that went on such historic planes as the Blackbird SR-71 to yelling at a General in the Air Force.  He has been a lot of places and seen a lot of things...

My frustration with the traffic jam was still there but hearing all the stories that made him tick were marvelous to listen to.  The detail was still there as he remembered people's names working down family trees on his side on throughout his career was pretty incredible as I can barely remember my own name.  As the stories went on, you could hear his voice get strong as he transported himself back to his younger and more vibrant days.  As I listened and enjoyed the stories, I also understood a little more about the way I am. You are more like your parents then you ever want to believe as we all struggle to be that individual making what we think is our own particular way.  The outcome maybe different but the way is often the same. Nothing wrong with that.  Thanks Wifey.

* Rack pulls conventional and sumo for 3 reps each working up to 4 plates. Pause right off pin with pause right before letting off at pin

* SSB squats. Worked up to 335ish after many sets.

* Bench worked up to 405x1 off softee and back down for 3 drop sets. Happy with the 405 Pretty clean. Had more but the song said let it be so obliged.

* Lots of activations with the Tim Tam and boomstick. Chest and arms were beat up from benching yesterday so did some BT work on them for 8 mins a arm

* Some light stretching with band and Tim Tam

* Used Squat buddy for deadlift. Working with a add on add to work the compression at top (basically hold the adductor and hammy together) and other angle to have a adjustable strength levels.  Worked up to 405x3x3 with slight pause off floor.  No back issues so canned it there.