If you follow the Spud, Inc. Facebook page you will know that Marc and I completed a Human Dissection course last week in Tempe, AZ at the Laboratory for Anatomical Enlightenment.  The class was taught by Todd Garcia and Tom Meyers and it was way beyond anything we had expected.  We started on Monday by gathering, introducing ourselves and talking through what would be happening during the week. Both instructors stressed two things 1) Whatever happens, whatever you feel, whatever excites you, scares you, makes you sad, stimulate your brain...whatever happens just let it happen.  Those feelings and thoughts are all part of the process and 2) We would not find many “answers” but we would find a whole bunch of new questions.

Boy were they right!  The first day I watched Todd Garcia dissect through the Pec major into the pec minor and along the inner arm and it was all so beautiful that I sobbed.  Truly, I was not crying because I was sad, I was crying because I was simply overwhelmed with what I was seeing AND with how masterfully our bodies are crafted.

I am going to try to share some of my thoughts and questions that surfaced during the week.  They are many and they are varied so for continuity and sanity sake I will make them into several different posts.  This first one I want to tackle the ideas that bubbled to the surface during the week on Creationism vs Evolution, or more simply put did we evolve into this masterpiece that is the human being or did GOD create us.  Science vs. Religion.

I know, I know I could stir up a HUGE hornet’s nest with this discussion…but I hope I don’t.

To fully grasp my thoughts, I feel like I should state that I have always believed the two (Creationism and Evolution) are not mutually exclusive.   I know that normally, this is an either/or fight with people on each side vehemently arguing their point of view.  I have never been tugged by the need to come down decidedly on either side.  In fact, I think I even argued this point during a class way back in High School.  I believe in both sides of the coin.  Science gives us explanations for so much, but the more you dig the more you find this unexplained use of patterns and math and artistry that there just doesn’t seem to be a way to explain with just science.

The phrase Todd Garcia used was “Sacred Geometry”.  When I searched the almighty Wikipedia I found this explanation: According to Stephen Skinner, the study of sacred geometry has its roots in the study of nature, and the mathematical principles at work therein.[4] Many forms observed in nature can be related to geometry; for example, the chambered nautilus grows at a constant rate and so its shell forms a logarithmic spiral to accommodate that growth without changing shape. Also, honeybees construct hexagonal cells to hold their honey. These and other correspondences are sometimes interpreted in terms of sacred geometry and considered to be further proof of the natural significance of geometric forms.

So what does all of this have to do with dissection class?  Let me ‘splain.  No there is to much.  Let me sum up. (anybody get the reference? I will buy you coke if you do).  On the last day of class we pretty much get to do whatever we have to do to see whatever it is that we haven’t seen yet.  At our table, we got to watch Todd Garcia dissect down to C1 and C2 vertebrae.  (I am definitely not telling you what he had to do to get there).  It took him a good bit of time and skill to get there and the whole time we were just watching him work (he really is amazing to watch).  At one point he said “Just wait, I promise what I uncover is going to be worth it.”  He got down to C1 and exposed the Dens or the Odontoid Process and stopped.  We stopped.  With a very calm voice Todd said “Do you see the praying monk”.  We stopped.  No one spoke.  So, he showed us.  The odontoid process looks like the head of the monk bowing down, the joints on either side are the shoulders and the axis coming around the front are the monk’s arms.

Wow!  We all saw it at the same time.  No one spoke. Finally someone just said “Damn”.

You can see the picture below.  But a picture doesn’t really do it justice.  Seeing it for real, in person.  Seeing something that not many other people have actually seen.  Seeing this beautiful “picture” written in bone made the term “Sacred Geometry” solid – at least for me. 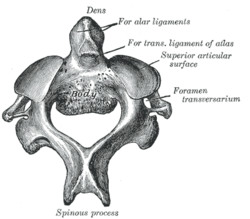 Did God make us or did we just evolve from slime?  I don’t know, I don’t care, I don’t need a definite answer. I am happy with my conclusion that both are true.

Are you ready for me to blow your minds again???  There is more to come so stay tuned.